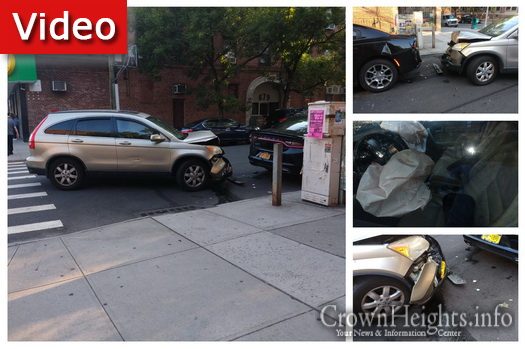 Car Totaled by Car Jacker in Crown Heights, Drag the Owner before Wrecking (UPDATED 11:30AM)

An early morning Kingston Ave car jacking in Crown Heights left a car totaled and another damaged. The car jacker fled the scene on foot, after dragging the owner nearly a block. The owner of the vehicle was taken to the Hospital for his injuries.

Around 7:30am Monday morning, a Jewish man left his car running while getting something from his trunk. The location was Kingston Ave and Crown Street, in the center of Crown Heights.

A young man, described at wearing a white shirt and black shorts, suddenly jumped into the driver seat.

Realizing that his car was about to be stolen, the owner rushed to the side of his car and grabbed onto the door. A nearby woman screamed as the car jacker made a sudden U-turn, and began driving the wrong way down Kingston Ave.

CrownHeights.info would like to remind everyone to remain vigilant, and secure your vehicle at all times. There has been a rash of car break ins and car thefts in the community, and the key to staying safe is prevention. NEVER leave your keys in your car, and always remove all valuables.

UPDATE: Two teens were involved in the car jacking this morning.