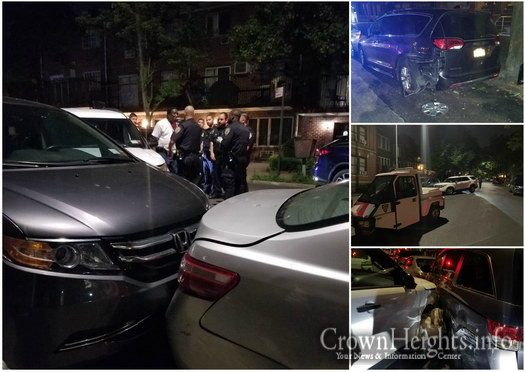 In the early hours of Tuesday morning, an intoxicated driver crashed his car in Crown Heights, hitting three parked vehicles. Crown Heights Shomrim responded to the accident, and the man was ultimately arrested by the Police.

Around a half hour after midnight Tuesday morning, Crown Heights Shomrim received a call for a driver that had swerved into a couple of parked cars.

The driver had been driving on Montgomery St between Albany and Troy, when he swerved and hit three parked cars.

Shomrim volunteers responded, and kept the scene calm while ensuring that driver remained on scene.

The police arrested the driver for driving while intoxicated.

Approx 12:30 AM we received a call for a driver that swerved into a couple of parked cars. Our Vol kept the scene calm and ensured that driver remained on scene. He was arrested by @NYPD71Pct for driving while intoxicated #ItsWhatWeDo #DontDrinkAndDrive #DWI pic.twitter.com/VkOxQVJOb6