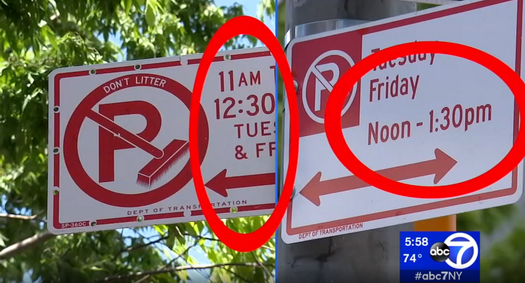 An alternate side parking sign has sparked confusion and tickets for drivers in Brooklyn, reported abc7NY.

One block has two different times for street sweeping. When the city didn’t clear matters up, 7 On Your Side stepped in.

“The problem is with this sign right here,” Samantha Weeks said, pointing to a sign at the corner of Empire Boulevard and Troy Avenue in Crown Heights.

But residents say it’s s mistake that’s costing them a lot of money, racking up ticket after ticket.

Weeks has lived on Empire Boulevard since her son Robert was born and he’s about to turn 10. She moves her car every Tuesday and Friday between 11 and 12:30 for street cleaning. But suddenly early this spring, the tickets started springing up like weeds at $45 a pop for violating the “No parking street cleaning rules between 12-1:30.”

“What was most conflicting is the signs, before it was 11-12:30 on this block,” said Hezron Williams.

Williams and Weeks showed us all their tickets. Pointing out a sign in the middle of the block, the sign is the same, reading “No Parking between 11-12:30 on Tuesdays and Fridays,” but for six cars between that old sign and this new one, the time switches: No parking between noon and 1:30. So on just a quarter of the block, the cars parked there got tickets.

7 On Your Side documented the conflict and sent the pictures and the tickets to the city’s DOT.

It turns out the wrong sign pointing the wrong way was put up when a new curb and street lamp were installed at the beginning of May.

But just days after we pointed out the problem, the city DOT replaced the alternate sign parking signs with the correct one which matches the rest of the block.

Samantha and the other residents had their violations dismissed and the fines were removed from her record.