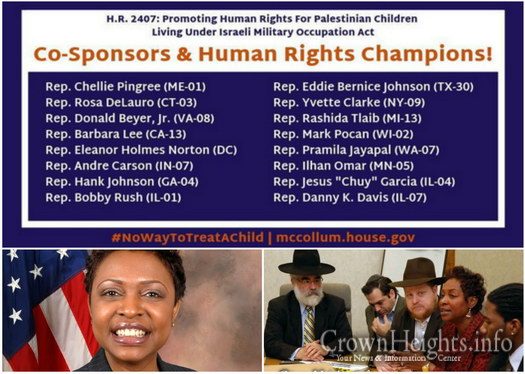 Congresswoman Yvette Clark, who represents the 9th district which includes Crown Heights, is one of the co-sponsors of a bill Promoting Human Rights for Palestinian Children under Israeli “Occupation.” She is sponsoring the bill with other members of congress, including Congresswoman Ilhan Omar, who has come under repeated fire for anti-Semitic statements.

Clarke, who was touted by Crown Heights politicians as a friend of Israel, is presently a Co-Sponsor to bill H.R. 2407: “Promoting Human Rights For Palestinian Children Living Under Israeli Military Occupation.” She is Co-Sponsoring the bill with Representative Ilhan Omar (D-MN), Who has caused repeated uproar for her anti-Semitic and anti-Israel rhetoric.

During the last incident in which Rep Omar had accused the American Israel Public Affairs Committee (AIPAC) of paying members of Congress to support Israel, in addition to an anti-Semitic insinuation, Clarke had stood up with other Democratic politicians to condemn the remarks. Now, she appears to be working with Rep. Omar in her anti Israel agenda.

Yvette Clarke has been in Congress since 2007, and was re-elected recently with the endorsement of Crown Heights politicians.