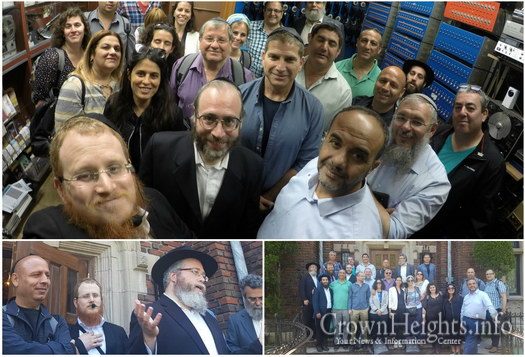 A delegation from the Israeli Local Authorities Group, including the mayors of Gush Etzion and Metulah, made a stop by 770 on a tour sponsored by Kolot and the World Zionist Organization.

The tour began in Boro Park led by journalist Jacob Kornbluh of the Jewish Insider, and continued on to Crown Heights with Activist Rabbi Yaakov Behrman.

The group visited 770, with the tour led by Rabbi’s Yisroel Zilberstrom and Mendel Aizenbach, including the Rebbe’s room, the WLCC broadcast room, and the Library of Agudas Chasidai Chabad.

The visit to 770 was followed with a stop at Mendy’s restaurant, where they were addressed by Rabbi Dovid and Baila Olidort, on Chabad’s impact worldwide.