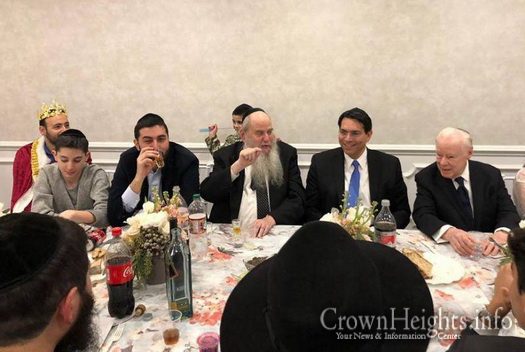 Israeli Ambassador to the United Nations Danny Danon visited the house of Rabbi Mendy Kotlarsky, and joined him for the Purim Seudah Thursday evening.

At the meal, the Ambassador made mention of the landmark announcement made by President Donald Trump on the Status of The Golan Heights in Israel. The Golan Heights, captured by Israel from Syria in the Six Day War, had never officially been recognized as Israeli, rather termed Israeli Occupied. The President had tweeted that the time had come to officially recognize Israels sovereignty over the Golan Heights.

Rabbi Mendy Kotlarsky wrote “Truly a privilege to host the Hon. Danny Dannon Israeli ambassador to the UN and his family the same day our president recognized sovereignty of the Golan Heights!”