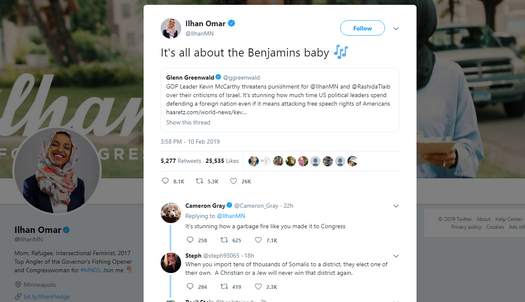 Yesterday evening, a new member of congress from Minnesota named Ilhan Omar tweeted a clearly anti-Semitic trope about Jews controlling the US congress with their money (see screenshot below). The condemnation of her tweet, and even worse follow up tweets, by her fellow house members started off as a slow trickle. Ultimately, lead by two members of the New York State delegation, both of whom happen to be Jewish, Republican Lee Zeldin and Democrat Max Rose, the condemnation poured in. By early this afternoon at least 23 members of congress including the entire Democratic party leadership, had come out with statements condemning her statements.

Congresswoman Omar’s apology has of now not been accepted by any prominent members of the American Jewish community. Her apology comes as she continues to attack the Jewish/Israel lobby in inappropriate ways.

I personally called the Brooklyn office of congresswoman Yvette Clarke who represents Crown Heights, her district is one of the ten largest Jewish districts in the entire USA. I was directed me to her Washington office, which gave me the email address of her communications director. I emailed the director asking for comment making it clear that I have a deadline of 5:00pm. Well that deadline has come and gone, and sadly it seems like our representative has once again let us down. This was an easy opportunity for her to be on the correct side of a growing issue. She would not face any push back, it was a win-win for her and even this she couldn’t get a handle on.

Adem Bunkeddeko, who narrowly lost to Yvette Clarke in the most recent democratic party primaries, messaged us the following statement. “Rep. Omar’s highly offensive use of anti-Semitic tropes has no place in our public discourse. While I appreciate the fact that she has since apologized for her remarks, this is the time for all Americans to stand united against discrimination of any kind.”