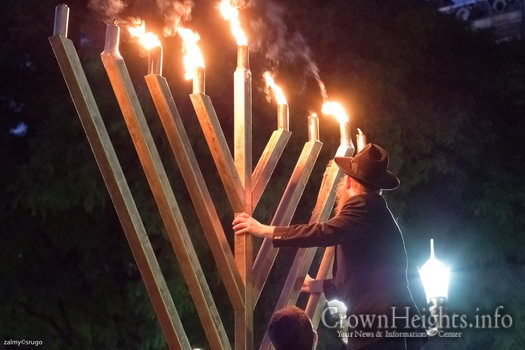 The Halachos: Lighting the Menorah

Courtesy of Rabbi Garelik of Sichosacademy.org, we present a series on Halochos of Chanukah:

b. It is placed in the doorway opposite the Mezuzah. (The Roshei Teivos of “Mezuzah Yemin, Chanukah Smol”
spell “Moshiach.”)

c. We are not particular that the candles should face a specific direction.

d. Only if possible, children should light in the doorway of their bedroom.

a. We light the Menorah between Mincha and Ma’ariv (after Shekiah (sundown), besides for
Friday and Shabbos – see below.)

b. If it is already after nightfall and one did not yet light candles, they may be lit after Ma’ariv. (To
illustrate: There were many times during Chanukah when the Rebbe would return from the
Ohel, daven Mincha and Ma’ariv, and only then go home to light candles.)

c. Those who are going to eat in someone else’s home should light candles (later) in their own home.

a. One should wear his gartel when lighting candles, but may wear weekday clothing.

b. When preparing the Menorah, you place the wicks on the right side of the Menorah, and add
one more each night from right to left. When lighting the flames, we begin with the newest
candle first, and go from left to right.

c. The Rabbeim would not use fresh wicks each night (rather changed them as necessary.)

e. It is customary to sit by the candles for half an hour. The Rebbe Rashab would study Torah next
to the Menorah being careful to do so in a way that was permissible (not benefitting from the
light of the Chanukah candles.)

f. The flames should burn for at least 50 minutes. If the flame goes out before this time, it should
be rekindled without a bracha.

4. While the candles are burning:

a. Women should not do any work, such as sewing, weaving, washing clothes and ironing. After
the 50 minutes it is permissible, but not where the flames are visible.

b. After lighting the candles, the Menorah may not be moved for 50 minutes. After that, it may
be moved even if the flames are still burning.

Lighting in Shul:
1. Arrange the time of Mincha so that the lighting will take place after Plag haMincha.
2. Lighting in Shul is done during Mincha, after Kadish Tiskabel, and before Aleinu Leshabe’ach.
3. One who says the Brachos in Shul may then recite the Brachos again in his own home. On the
first night however, he should recite Shehecheyanu again at home only if others are also being
yotzei from his lighting.
4. The candles should burn during Shacharis and Ma’ariv as well (but no Brocho is said).