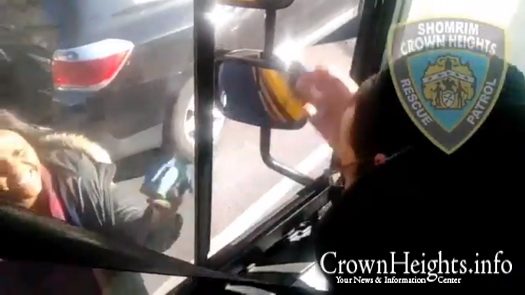 A local school bus driver and Crown Heights Shomrim Volunteers act of chesed was caught on camera Friday. A wallet, dropped on Wednesday was returned to its rightful owner Friday morning, following tenacious detective work in finding its owner.

Nosson Shusterman, a local school bus driver and Crown Heights Shomrim Volunteer, was caught doing an act of chesed Friday morning as he returned a wallet found on the street.

The wallet was found on Wednesday laying in the middle of the street on Montgomery St between Utica Ave and East New York Ave. When they opened the wallet, they found an ID, Credit Cards, as well as cash inside.

The ID was obviously of someone not from the community, but this did not deter Nosson from attempting to find the owner.

Nosson recruited the help of his wife, and the owner of the wallet was located, contacted, and a meet was set up.

Video of the day: A wallet with cash CC and ID was found on the street and promptly returned by our Vol to its righful owner #GoodNeighbors pic.twitter.com/sfmf4dTu6y