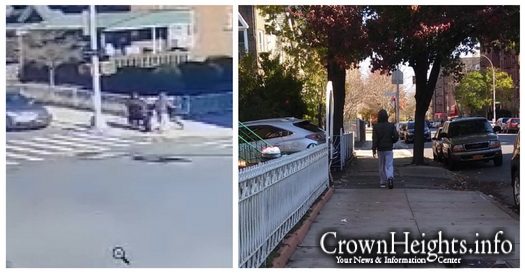 In an unprovoked incident, a Jewish woman was pushed while waiting for traffic light on Lefferts Ave Sunday morning. The perpetrator fled the scene.

The unprovoked incident occurred Sunday morning at 11:40am at the corner of Brooklyn and Lefferts Ave across the street from Bais Rivkah Schools Campus Chomesh. A Jewish woman, walking with her child, was waiting for the light when a man angrily crossed the street and shoved her out of his way. When asked for an explanation, the man turned around, and again approached the victim, this time using only angry words to assault her.

Crown Heights Shomrim was immediately called, and began to canvas the area. The perpetrator, described as a black male wearing a khaki green jacket and white sweat pants, was not found.

Video footage of the incident shows the man fleeing down Lefferts towards Kingston Ave.

There has been a spike in unprovoked and anti Semitic attacks in Crown Heights recently, with a disproportionate percentage committed by those with mental illness. The city has continued to house, and expand housing for the mentally ill specifically in the Crown Heights area. Other recent incidents have prompted both a political, and public outcry, causing Crown Heights Shomrim to put out a Safety Alert to the residence of Crown Heights.