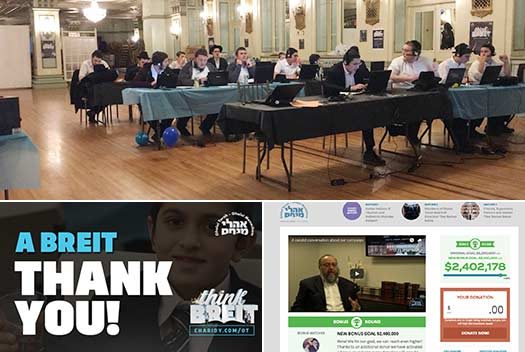 In an unprecedented campaign, Educational Institute Oholei Torah raised over 2.4 million dollars from 2248 supporters, friends and alumni from around the world! The event showed the great impact and loyal support the Mosad has, which expressed itself in the vast numbers.

This campaign was a kick off of a multi-million dollar campaign to expand its Eastern Parkway campus. The board is in the process of establishing protocols to oversee the advancement of this project.

As a first step towards this expansion, the funds raised through this kick off campaign will be used to secure the purchase of the next door apartment building, directly adjacent to the left side of the campus.

The matchers of this campaign, headed by HaRav and Rebbetzin Yitzchok Raitport, the Board of Directors and a group of loyal supporters, see the need for expansion and the vision to make this a reality. R’ Shaya and Sarah Boymelgreen joined the campaign too, adding a bonus round and giving their encouragement for the future expansion.

Rabbi Joseph Rosenfeld, Executive Director, said “We saw yesterday the outpouring of support, which encourages us to double our efforts in initiating the expansion campaign.” As one who has been instrumental in the growth of the mosad for 60 years, he sees the success and accomplishments of Oholei Torah all due to the brochos of the Rebbe, and the hard efforts of the Board of Directors, the entire staff, administration and faculty of the mosad.