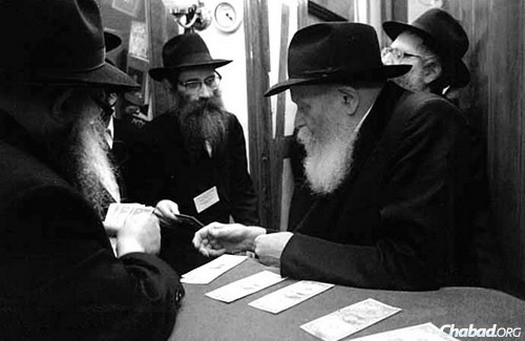 Rabbi Meir Roness receives a dollar from the Rebbe.

The drawing of Keren Meir’s Grand Raffle was held on Wednesday night in Crown Heights. Over the past few weeks, thousands of tickets were bought in support of the extraordinary work of Keren Meir. Congratulations to all who participated in support this vital work!

Keren Meir was founded in loving memory of R’ Meir Roness a”h. A familiar figure in Crown Heights, R’ Meir was frequently seen collecting tzedakah, which went to support Shiurim in Chassidus disseminated in tens of Yeshivos and Shuls in the Greater New York area. As a bochur he began organizing the Shiurim himself, and later went on to support them; a task he did until his last days.

With his untimely passing 3 years ago, his family established Keren Meir to continue this vital work – ensuring that the shiurim be taught in the existing yeshivos and batei midrash, and increasing the numbers ever further as well.

Undoubtedly, this Hafotzas HaMaayanos initiative will bring us ever closer to the imminent coming of Moshiach.

The lucky winner of the Grand Raffle is R` Yosef Tovia Domnitz – Toronto, Canada, who will receive 2 round-trip airline tickets to Eretz Yisroel PLUS a weekend’s stay at the prestigious Waldorf Astoria Hotel in Jerusalem.