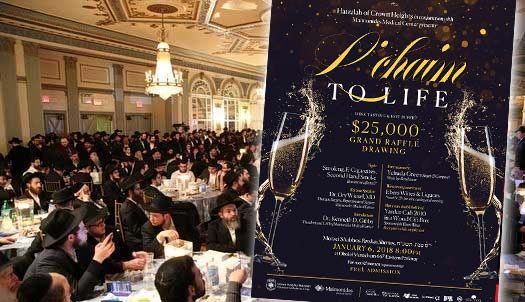 This Motzai Shabbos, men and women are invited to join Hatzalah of Crown Heights for a Melava Malka, featuring a hot buffet and wine tasting, alongside a health symposium, raffle for $25,000, and entertainment by Yehuda Green, a noted singer and composer. Also, a rare double bottle of Yarden Cab 2010 in a wood box will be raffled off among those in attendance.

The Melava Malkah will take place this Motzai Shabbos, January 6, 2018, at 8:00pm in the Oholei Torah Ballroom, 667 Eastern Parkway. The event is for both women and men, with separate seating and admission is free.

The event will feature a talk on the topic of “Smoking, E-Cigarettes and second hand smoke”, and will delve into how we are affected. The talk will be presented by Dr. Ory Wiesel, who is in the Department of Thoracic Surgery at Maimonides Medical Center.

Also, Dr. Kenneth D. Gibbs, the President and CEO of Maimonides Medical Center, will be introduced.

The event will conclude with a grand raffle on $25,000, as well as on a rare double bottle of Yarden Cab 2010 in a wood box – sponsored by Eber’s Wine & Liquor.

Entertainment will be by Yehuda Green, a noted singer and composer, who will perform in a Melava Malka and kumzitz format.

Tickets for the $25,000 raffle can still be purchased ahead of the event by clicking here, as well as in person at the event itself. 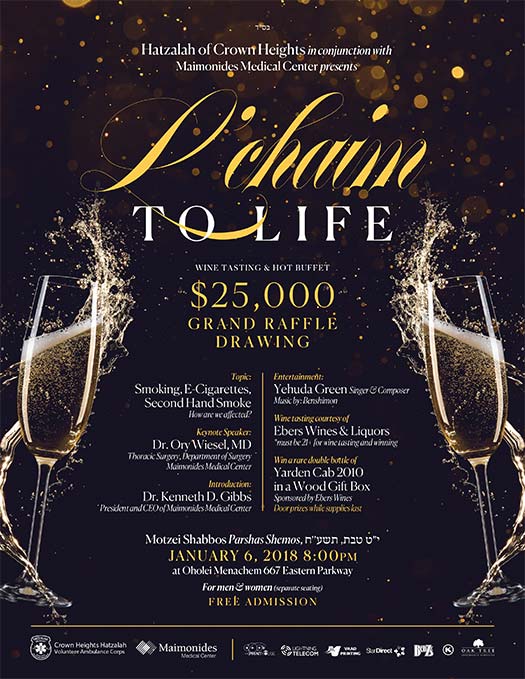