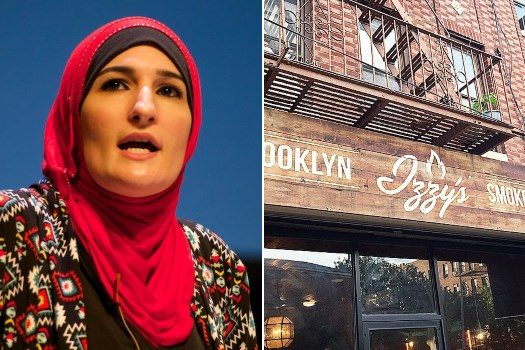 Jews in Crown Heights and all over the city have rallied behind the brother of prominent BDS advocate Linda Sarsour after an extremist group issued a call for him to be “run out” of the kosher restaurant where he works.

Mohammed “Moe”  Sarsour — who works at popular kosher barbecue joint Izzy’s Smokehouse — was reportedly targeted on a flier issued by the Jewish Defense Organization (JDO) as punishment for his sister’s political activities. “Linda Sarsour[,] a hard core Hamas Islamic Nazi terrorist … has a brother pro-Hamas terror [sic] who works at Izzy [sic] Smokehouse. … Let us run him out now before it’s too late!!” the flier said.

But the guilt by association harassment was, according to The New York Jewish Week, too much for patrons of Izzy’s, who remembered Moe Sarsour’s successful effort to save the life of a man who was stabbed outside his father’s store two years ago.

“Linda Sarsour is problematic, Mohammed isn’t,” Simcha Bard, who has known Sarsour for several years, was quoted as saying. “Quite frankly, anything you might associate with Linda in any way shape or form, shouldn’t define her brother. Linda is fair game, but to attack Mohammed is truly unfair considering his decency and his record of public service, having saved a stabbing victim.”

Commenters on local Crown Heights news websites echoed Bard’s views. “When you are in Izzy’s and you see Moe interact with the people you see his respect for our community and we should embrace that and show how beautiful our community can be,” one post read.

“This is revolting, disgusting, and un-American,” another commenter wrote. “The publishers of this flyer should be embarrassed of themselves. This is not how Jews are supposed to act.”

A.J. Weberman, a representative of the JDO, told The Jewish Week that the fliers were produced by “a more extreme part” of the group, but added that if Moe Sarsour wanted to work at a kosher restaurant “he should denounce Linda.”