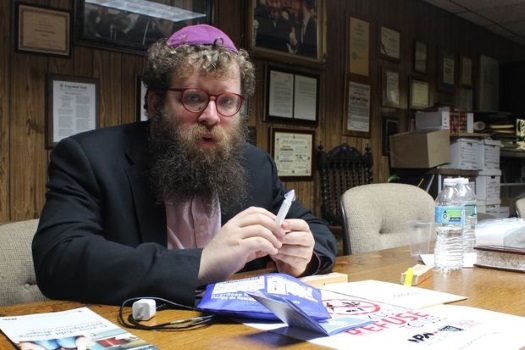 Chasidic Crown Heights is not immune to the opioid epidemic that is ravaging the country, says Operation Survival activist Yaacov Behrman. He doesn’t intend to sit idly by and watch it happen.

The first opioid overdoses in Yaacov Behrman’s neighborhood happened more than a decade ago, around 2005, he remembers.

At the time — a period when accidental overdose deaths were rising in New York, according to data from the city’s Department of Health — he said many in his community of Lubavitch Crown Heights thought the “first kids we lost” were exceptions.

But in the years since, at least 10 young people in the Hasidic Jewish community have died using drugs, usually prescription painkillers, according to Behrman, program director of the Chabad-Lubavitch-founded drug prevention group Operation Survival.

“When it happened over and over, people started to realize it was a real issue — a real epidemic,” he said.

Now, Behrman and others in the Crown Heights Jewish community are trying to raise the alarm about the dangers of opioids, which have hit New York hard, as they have all over the country.

Last year, the city was on track to see more than 1,000 accidental overdose deaths for the first time ever, according to the most recently available health department data. Of the overdoses tracked through November of 2016, 83 percent of all deaths involved an opioid, the agency said.

Many of those overdoses were due to prescription painkillers, such as those that have ravaged families on Staten Island in recent years. In the past two years in particular, an uptick in the use of a powerful opioid known as fentanyl — commonly mixed with heroin or mixed with handmade prescription pill look-alikes — has pushed the number of deaths higher, according to the DOH.

It’s unclear which drugs exactly are killing young people in Crown Heights since no data is available on overdoses by neighborhood or religious group. But Behrman most commonly sees overdoses, both fatal and nonfatal, caused by pills taken recreationally and sold by dealers “all over” the area, he said.

That’s what killed a close friend of Eli, a 30-year-old Crown Heights resident who spoke with DNAinfo using only his first name. The friend, who was 25 at the time of his death five years ago, used opioids from time to time, but “wasn’t a drug addict,” Eli said.

But one “bad-batch drug” caused an overdose and killed his friend, a trauma that left Eli “broken,” he said — and wanting to increase awareness of the problem.

“It’s happening way too much in our community,” he said. “I felt it was important to let the parents and the community members know what’s going on.”

Last fall, he partnered with Operation Survival to lead an event educating Jewish families in the neighborhood about opioids and drug use. About 650 people attended, he said.

“Family members and parents of people in the community are slowly becoming more open to the realization that this is something that’s real,” he said.

But he also acknowledged there are still many “who are in denial” because either they’re scared for an addicted relative or because “they don’t want to believe that in their community, an Orthodox Jewish community like Crown Heights, it’s such a problem.”

“That’s unfortunate because if people don’t want to believe it or don’t want to hear it, they’re not going to become knowledgeable about it,” he said.

To push the conversation, Operation Survival, founded in 1988 by members of the Chabad-Lubavitch movement, has made an effort to get their anti-drug message into the hands of locals — literally.

In honor of National Prevention Week, the group handed out shopping bags emblazoned with the words “Teach kids to refuse to use” all along Kingston Avenue last week, the main shopping district for the Lubavitch community.

And for more direct overdose prevention, Behrman has been training teachers, emergency response volunteers, parents and young people how to use naloxone, a drug administered by nasal spray that can reverse the effects of an opioid overdose.