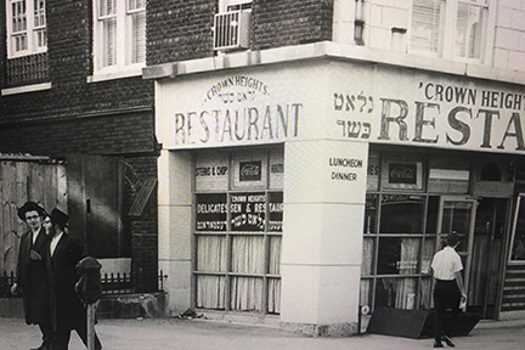 Dolly Rotter, a Chabad chasidic grandmother of 19 and great-grandmother of 25, has lived on the south side of Eastern Parkway in Crown Heights since she was 6 years old. When the first kosher pizza shop, Shabsie’s, opened on Utica Avenue in the 1960s, she recalled the jubilation in the then-fledgling chasidic community.

“Forget about restaurants — there was a time in Crown Heights when if you needed a button and thread, you went to Borough Park,” she said. Shabsie’s opening beckoned in a new era “that sparked an interest in a lot of people opening pizza stores.”

Fast forward to today — Crown Heights, which is headquarters of the Chabad-Lubavitch movement, is quickly becoming an epicenter of fine kosher dining, drawing patrons from across the New York metropolitan area and beyond. In the rapidly shifting Brooklyn neighborhood — as rents skyrocket, bike shops replace bodegas and young hipsters become fixtures in multiplying coffee spots — the artisanal kosher food scene is seemingly the next evolution amid the neighborhood’s changing demographics, a unique confluence of chasidic and bohemian culture.

The shift was highlighted last month by the highly publicized battle between two kosher pizza restaurants on the north side of Eastern Parkway and Kingston Avenue — Calabria, the recently opened Roman-style pizza eatery, and Basil Pizza & Wine Bar, a popular upscale kosher restaurant that opened in 2010 and is credited with ushering in the new era of fine kosher dining in the neighborhood. While the chasidic owners faced off in religious court over whether the newcomer broke Jewish law by opening so close to Basil, creating unfair competition, readers realized what Orthodox diners already knew: when it comes to eating well and eating kosher, Crown Heights has, perhaps surprisingly, arrived as an eating destination.