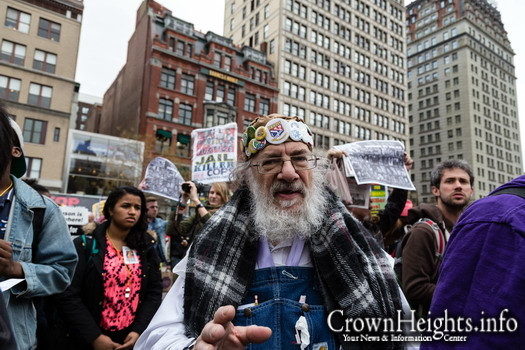 Beloved Crown Heights personality ‘Charlie Buttons’ is unfortunately in the hospital due to health complications, and his brother requested that Tehillim be recited on his behalf. His name is Tzaddik haLevi ben Masha Ruchel.

His brother, Yerachmiel Altman of Sharon, Massachusetts, in an open letter to the Crown Heights community, wrote:

My dear brother Tzaddik haLevi (Charlie Buttons) has again taken to saying Chassidus in the double arches (Methodist hospital, Park Slope). He is in room number 709A South.

1] If anyone is able to visit him it would be a great mitzvah. Bring him kosher food (that is according to the diet they have put him on – you’ll have to ask him as it is changing almost daily).

2] I find it hard to believe but I am begging people that if they want him at their simchas MAKE CERTAIN he drinks water. This is far too many times he has been taken to emergency for dehydration. Tzaddik haLevi NEVER thinks about himself. He doesn’t think about drinking on hot days or what happens if/when one doesn’t drink. PLEASE especially if you enjoy his mitzvahs in bringing simcha to everywhere, ensure he drinks water when with you.

Please call Methodist and ask to speak with him or even better go and visit. For everyone who has enjoyed his simcha, let’s work together to bring him some simcha!