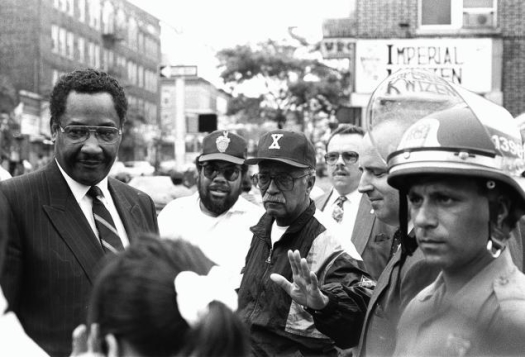 Mayor David Dinkins (center) and Deputy Mayor Bill Lynch (second from left) at the scene of the 1991 Crown Heights riots. De Blasio was Lynch’s pointman during the crisis.

The paper challenged de Blasio’s decision to enshrine the former mayor’s name atop the building housing the comptroller, public advocate and various city agencies in downtown Manhattan, citing Dinkins’ failures to properly address two racially heated incidents during his single term: the Crown Heights riots — a “pogrom,” as many in the Jewish community called it — and the boycott of Korean shops also in Brooklyn.

Additionally, “crime was out of control during the Dinkins years, a crisis summarized by a classic Post front-page headline: ‘Dave, Do Something,’” the typically conservative Post reasoned.

“It isn’t denigrating David Dinkins’ devotion to the city — or his lasting place in history as New York’s first African-American mayor — to suggest that perhaps the city should be a bit more selective when it comes to such honors,” said the Post.

The Crown Heights riots broke out early during Dinkins time as mayor — in 1991 just one year after he was elected. The three days of African- and Caribbean-American anti-Jewish violence were triggered when a member of Rabbi Menachem Mendel Schneerson’s three-car cavalcade careened onto the sidewalk killing a local seven-year-old immigrant child of Guyanese parents.

Describing the explosive incident, the New York Times wrote in August, 1991: “Hasidim and blacks clashed in the Crown Heights section of Brooklyn through the day and into the night yesterday as the two communities, separately and bitterly, each mourned a member killed, one in a traffic accident on Monday night and the other stabbed in the racial melee that followed.”

“Bottles, rocks and ethnic slurs were hurled as hundreds of police officers struggled to separate the screaming, taunting groups near the headquarters of the Lubavitcher sect, at 770 Eastern Parkway,” the newspaper explained.

Owing to his failures to address these issues, Dinkins suffered a defeat at the polls in 1993 after just one term, losing to Rudy Giuliani.