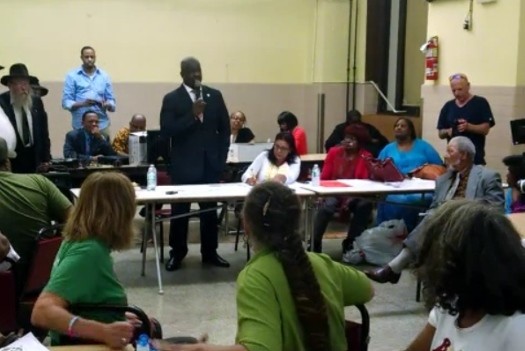 After more than a year of controversy, Brooklyn Community Board 9 voted Tuesday to again recommend the city study zoning changes in parts of Crown Heights.

At the end of a three-hour meeting marked by chanting, shouting and a constant police presence, CB9’s members voted 26-6, with 3 abstentions, to accept a rezoning resolution to the Department of City Planning, requesting that the agency start studying possible land-use changes in the parts of southern Crown Heights and Prospect-Lefferts Gardens.

The document has been at the heart of a yearlong debate over rezoning the neighborhood, which began when CB9 originally sent the letter to DCP in the spring of 2014. Opponents say that the process has already excluded them and their concerns.

Following intense protest by the local activist group Movement to Protect the People, the spring resolution was formally rescinded last fall and languished in committee ever since, stalled by both protests and a series of parliamentary missteps by the board.