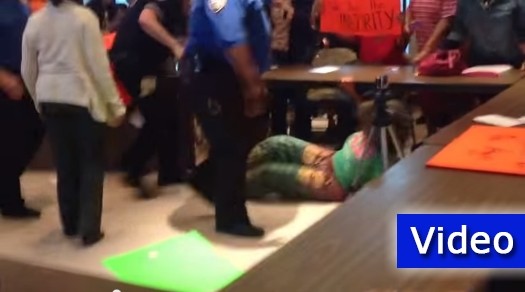 A committee at Brooklyn’s Community Board 9 pushed through a vote in favor of a controversial rezoning process during a chaotic meeting Tuesday night in which police dragged out and arrested a longtime protester.

Alicia Boyd, the leader of the activist group Movement to Protect the People, will be charged with resisting arrest, reckless endangerment, obstructing governmental administration and harassment, police said, after she swiped a piece of paper the board had been using to tally votes at the committee meeting and threw it across the room.

Police physically carried Boyd out of the room after she laid down on the ground and knocked over a table in an attempt to get away from the two officers making the arrest. The chaos at the meeting, held at the Crown Gardens apartment complex on Carroll and President streets, was captured on video by a Brooklynian.com reader and posted to YouYube.

Boyd and MTOPP attended the meeting to stop a vote on a controversial resolutionthat, if passed by the full board later this month, would start a study by the Department of City Planning to change land use rules in the neighborhood. In the past year, the group has effectively ground the rezoning process to a halt using a series of eye-raising tactics, including using racially-charged rhetoric and disruptive protests that have resulted in Boyd being arrested at least twice before.

Members of CB9’s land use committee members took a vote on the resolution while standing in one corner of the room Tuesday night while MTOPP supporters shouted them down across a table. Ten members voted to approve the document, one voted against and one abstained, multiple board members told DNAinfo New York afterwards. The results of the vote were never announced to the room.

CB9 has struggled with voting issues on the rezoning before. In the fall, it was revealed the district manager Pearl Miles had miscounted votes, changing the outcome of a key vote on the resolution. This March, the full board sent the document back to the land use committee after determining an earlier vote had been taken after the meeting officially ended, rendering it invalid.

But this time, the committee is confident the rezoning study will move forward.

“This one’s going to stick,” said Demetrius Lawrence, interim first vice chair of CB9 and member of the land use committee. “The full board is prepared to vote on this resolution, to send it to city planning for the study.”

The next full board meeting will be held on Tuesday, May 26 at 7 p.m. at the St. Francis de Sales School at 260 Eastern Parkway.