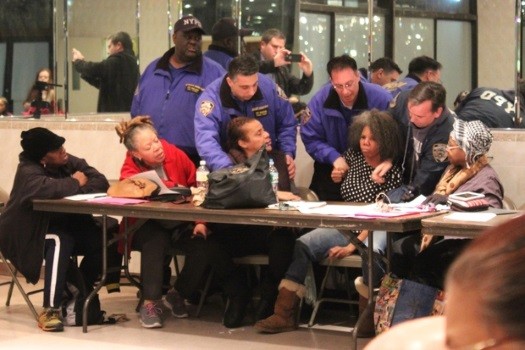 Police once again removed a local activist from a Crown Heights community board meeting after she repeatedly interrupted the gathering organized to discuss rezoning in the neighborhood.

At the start of Monday night’s Community Board 9 land use committee meeting, Alicia Boyd of Movement to Protect the People shouted down its members, claiming they no longer had standing given last week’s abrupt resignation of CB9’s chairman, Dwayne Nicholson, last week.

“Excuse me, but according to your bylaws, everybody begins again [is reappointed] when a new executive board comes into play,” Boyd interrupted the meeting to tell Ben Edwards, CB9’s land use committee chair, who was leading the meeting.

Edwards and the board mostly ignored Boyd’s repeated interruptions and attempted to proceed with the meeting. But by 7:15 p.m., soon after the meeting started, they asked police officers stationed at the back of the room to remove her.

“This is an illegal committee!” Boyd shouted as two officers led her out, saying to attendees, “You black people better start standing up and protecting this community, ‘cause otherwise they’re going to throw us out!”

Boyd received a summons for disorderly conduct, police said. It was the second time Boyd was forcibly removed from a CB9 meeting and hit with a summons. Her first summons came during a Feb. 11 CB9 meeting on the same issue.

The chaos continued after Boyd was removed Monday, with frequent interruptions and shouting from remaining MTOPP and board members alike over how to revise a controversial letter created last year to request the Department of City Planning start a study of changing land use rules in southern Crown Heights and Prospect-Lefferts Gardens. Concerns over how to define “affordable housing,” “modest” expansion of homes and “contextual” zoning dominated the conversation.

Shortly before 10 p.m., the committee voted — nine in favor, two opposed — to send a redrafted letter to CB9’s full board for a vote next week as MTOPP chanted “No vote! No vote!” over the roll call.

It’s unclear what specific language will be added or removed from the rezoning document. The board did not formalize any key points to be scrapped or revised before they voted.

The next full CB9 board meeting is set for Tuesday, March 24.

The discussion of the rezoning document has been pushed back repeatedly in past months as controversy surrounding the issue heats up. The neighborhood rezoning process started in earnest a year ago when CB9 first requested that city planning begin studying land use changes in response to an uptick in development in the area.