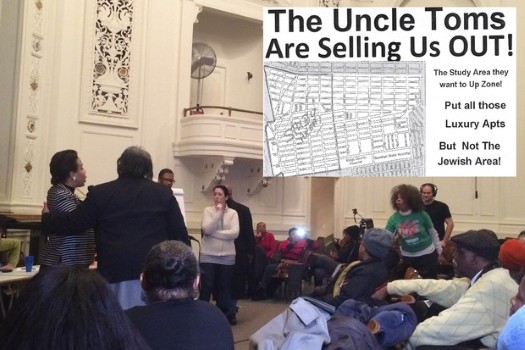 The Community Board 9 meeting — which was supposed to give the public a chance to discuss the shaping of a City Planning Department study about how the neighborhood should be rezoned —devolved into arguments after a local rabbi urged the community to leave race out of the conversation.

Rabbi Eli Cohen of the Crown Heights Jewish Community Council condemned “the rhetoric that’s gone out trying to [set] one neighbor against the other, one race against another, one religion against another,” alluding to recent brochures and emails distributed by the activist group Movement to Protect the People.

One such flier distributed at a CB9 meeting on Jan. 22 blamed “Uncle Toms,” “white developers” and the Jewish community for displacing black people in the neighborhood.

“I implore you,” Cohen added at Wednesday night’s meeting, “you may be very passionate about this issue one way or the other — don’t stick race into it.”

Cohen was immediately shouted down by Alicia Boyd, MTOPP’s leader, who was in turn told to “sit down” and “stop interrupting the meeting” by members of the audience at the St. Francis de Sales School for the Deaf, where the meeting was held.

During her public remarks several minutes later, Boyd forcefully reiterated her group’s concern that land-use changes allowing for larger developments on major streets west of New York Avenue would displace those who live in the neighborhood now.

“It displaces, goddamn it! It displaces,” she said of the idea to rezone the main corridors of Crown Heights. “And we will not be displaced out of our goddamn community.”

Boyd did not directly respond to the criticism of MTOPP’s racially charged statements.

Following Boyd, community board member and local blogger Tim Thomas asked MTOPP members to “tone it down” in his remarks before being silenced by the group’s shouting.

“We’ve got people in the neighborhood who are calling people Uncle Toms, [saying] they’re race-baiting Jews, they’re also — I see you right there,” Thomas told Boyd, who was standing a few yards away jeering at him. “You’re the one who called me KKK.”

Councilwoman Laurie Cumbo also joined the fray, describing the communication at recent CB9 meetings on the rezoning issue “disgusting” and “disrespectful,” before calling out Boyd directly.

“Talking over people, talking about people, the accusations that are being made…you can’t substantiate them and you cannot back them up,” she said to Boyd, who booed and shouted throughout Cumbo’s remarks.

The community board is currently trying to redraft a letter to the City Planning Department saying what residents do and do not want included in a study of changes to land-use rules in southern Crown Heights and Prospect-Lefferts Gardens. That document was originally sent to City Planning last spring by CB9, but was subsequently voted down by the board in the fall.

CB9 will hold another meeting to discuss the rezoning on Wednesday, Feb. 11, with the location to be determined. The board hopes to finalize its letter about the rezoning study and vote on it at the full board meeting on Feb. 24.