« Video: How to Get Rid of Your Fears
Two Israeli Soldiers Killed by Hezbollah » 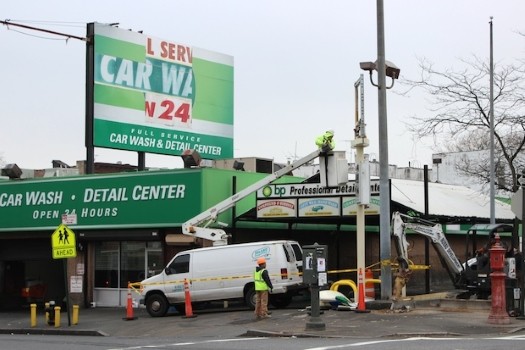 An eight-story, mixed-use building with affordable housing is set to replace a Crown Heights gas station at Eastern Parkway and Bedford Avenue that sold to a developer for $32.5 million, according to the broker and building permits filed Tuesday.

The real estate group Adam America purchased the corner lot at 1525 Bedford Ave., previously occupied by a gas station and car wash, broker TerraCRG announced Tuesday, the same day the developer filed permits with the city for the project.

The building will have 133 residential units, 20 percent of which will be designated as affordable housing, TerraCRG said. The project will also include 14,000 square feet of commercial space on the ground floor, 42 enclosed parking spaces and a gym, roof deck and basketball court for tenants.

Adam America bought the property for $32.5 million, TerraCRG said, though its unclear when the sale went through. The site has been on the market since last summer and the gas station has been closed since December, when workers disassembled the lot’s signage and put up construction fencing.

The project is not Adam America’s first in the area. The developer also built 500 Sterling Place, a rental building completed near Classon Avenue last summer and sold for $48 million this month, The Real Deal reported last week.

The new building on Bedford Avenue will be designed by the Manhattan-based firm Isaac Stern Architects. News of the project was first reported by The Real Deal.

« Video: How to Get Rid of Your Fears
Two Israeli Soldiers Killed by Hezbollah »