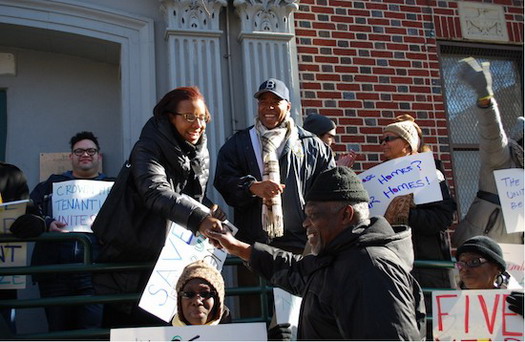 From the Brooklyn Daily Eagle:

Scores of residents and concerned housing advocates rallied in front of a Schenectady Avenue apartment building Saturday morning to demand protections for low-income tenants who fear they will soon be victims of illegal rent increases due to what they say is a “loophole” in the law.

Some 62 low-income families living in rent-stabilized Crown Heights apartments are facing imminent hikes that would double or even triple their rents, likely forcing their ouster. The increases are possible because of a “preferential rents” loophole, allowing landlords to conceal unlawful increases and engage in widespread rent fraud, protesters claim.

“The buildings are now in crumbling physical condition while the low-income, rent-paying tenants — leaders in the Crown Heights Tenant Union movement — are seeing unprecedented rental increases in one of Brooklyn’s most rapidly gentrifying neighborhoods,” said Kerri White, director of policy and organizing for the Urban Homesteading Assistance Board.

Tenants at 285 Schenectady Ave. and 1646 Union St., the buildings at issue in Saturday’s protest, moved into their apartments decades ago with subsidies from the Federal Government’s Department of Housing and Urban Development (HUD) and the city’s Department of Housing Preservation and Development (HPD).  In 2009, the buildings exited their subsidy programs and converted to rent-stabilized units. At the time, no protective measures were taken to ensure tenants’ safety and housing affordability, White claimed.

“They are doubling and tripling rents, while people don’t have gas and electricity on the coldest day of the year,” Cumbo said. “We are dealing with greedy entities. But what I’d like to say to them is that there is a movement growing in Crown Heights. I have never entered a fight I do not intend to win.”

Adams touched upon the impending sunset of the rent regulation laws in Albany, and the difficulty in renewing such protections in light of a Republican-led state Senate, as reason for the public to speak up and make elected representatives aware of the hardships faced by low-income tenants.

285 Schenectady Ave. and 1646 Union St. are owned by Renaissance Realty Company, a Brooklyn-based group that has recently bought upwards of 200 units of rent-regulated and affordable housing in the neighborhood. At the protest, Cumbo also criticized another company, Alma Realty, for attempting to remove about 700 units it owns near Prospect Place from rent regulation.

Brooklyn Brief has reached out to Renaissance Realty and Alma Realty, and can update this story if they respond.