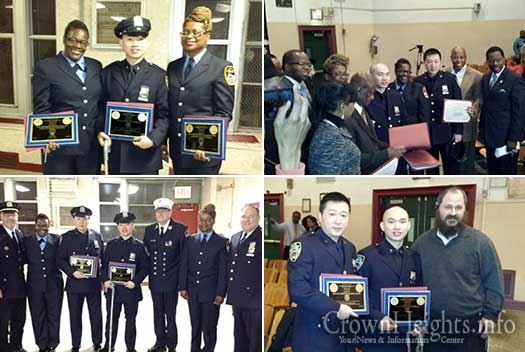 Rookie police officer James Li, who was shot while apprehending a fare-skipper, was honored at this month’s 71st Precinct Council Meeting. Also honored was the officer’s partner and two FDNY EMTs who came to the injured officer’s aid.

This month’s meeting took place in its traditional location at M.S. 61 on Empire Boulevard. The highlight of the meeting was a ceremony honoring two police officers and two emergency medical technicians following the February incident on Utica Avenue.

Two rookie police officers, James Li and his partner Randy Cho, who were assigned to foot patrols on Crown Heights’s Utica Avenue, spotted a pair of men attempting to skip a fare on an MTA bus by entering through its rear door.

The officers boarded the bus and removed the two suspects, when suddenly the situation turned violent. One of the suspects pulled a gun, shot officer Li twice and fled.

Two EMTs, Khadijah Hall and Shaun Alexander, heard the shots and immediately rushed to the aid of the injured officer.

All four were honored.

At the meeting, Captain Natalie Maldonado was introduced as the new commanding officer of Transit Division 32, which covers all of the subway stations in Crown Heights and its immediate surroundings.