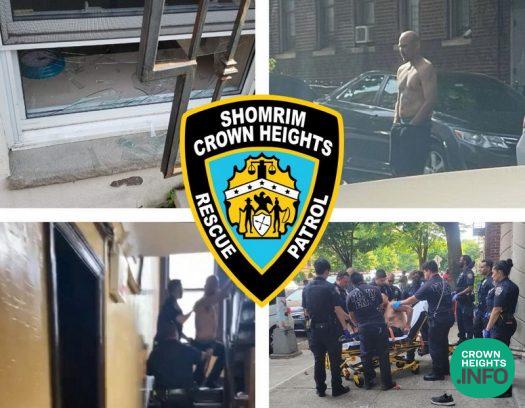 A shirtless man who followed a Jewish woman and attempted to break into a home was caught and arrested Monday thanks to the work of Crown Heights Shomrim.

Shomrim got the first call about the man Sunday afternoon when a person called their hotline and reported a man following a Jewish woman in the area of Schenectady Ave and Crown Street. Shomrim responded, but the man had already been scared away.

Soon after a second call was placed to Shomrim reporting that a man was attempting to break into a home.

According to witnesses, the man had attempted to force a window near the rear of the Carroll Street home, but after having difficulties, elected to grab a piece of wood and break in forcibly. A passerby heard the sound of breaking glass and rushed in, scaring the man into a neighboring building.

By then, Shomrim was already on the scene, and after calling 911, watched the building to see if the man would leave.

Minutes later, non-Jewish residents of the building escorted the man out, and after a brief altercation, the police arrived. After confirming the man’s identity and his connection with the attempted burglary and other crimes, he was placed under arrest. Due to his injuries sustained while fighting, he was first transferred to the hospital for medical evaluation.

In a tweet posted to their social media, Crown Heights Shomrim notified the community of the incident and thanked the police for their assistance. “At 5:15 PM this subject smashed the window to a Carroll street home with the intent of gaining entry,” they wrote. “Thanks to a quick response by our volunteers he was spotted nearby and his location shared with responding @NYPD71Pct officers. Job final: one UNDER.”