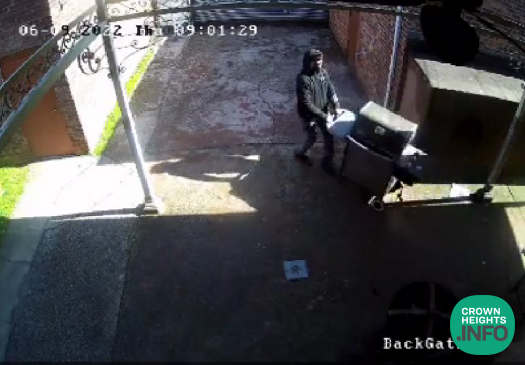 Brazen crime is getting worse and worse in Crown Heights, and little appears to be done about it.

A Crown Heights resident was astounded to discover that a brazen thief had decided to enter his property on Thursday, June 9th, and walk off with his grill.

The mind boggling footage shows the thief as he rides up to the closed gate on Montgomery Street around 9:00am Thursday and enters the property. At first, the thief appears to decide against taking anything, but doubles back and grabs one piece of loot. An entire grill.

The thief, who could easily be identified as the same one who went on a crime spree over last weekend, has been caught in multiple thefts and burglaries that have gone beyond the norm. In one case, the man was caught on video hopping a large gate to steal multiple packages, and in another could be seen using a CitiBike as a mode of transportation.

Why was it that this man felt safe dragging a stolen grill through the center of Crown Heights? And How is it that such a suspicious incident was not noticed by passers by?