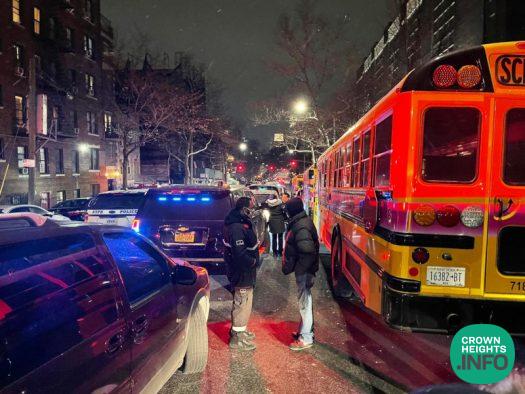 In a shocking and infuriating event Monday night, a person claiming to be an NYPD employee entered the Beis Rivkah building on Lefferts Ave with hundreds of girls inside, and proceeded to yell and threaten the school. Then the NYPD tried to cover it up.

According to witnesses at the school, a woman and man entered the school at the Lefferts Ave entrance Monday night while wearing NYPD apparel and claiming to be from the Police Department. At the time, hundreds of girls were inside watching the schools annual production.

The two then began yelling at a group of school staff that stopped them, allegedly screaming that they would deface the school and do physical damage.

911 and Shomrim were called, with Shomrim volunteers showing up moments later as the two left the building and continued making a ruckus along with other agitators.

Seeing the large response of vehicles and cars, the group of agitators took off, leaving the two on scene with Shomrim, and a long wait for the NYPD.

According to shocked witnesses, it took multiple calls to 911 and nearly 20 minutes for the NYPD to arrive. Once the NYPD did arrive, even worse happened.

The woman, still wearing the NYPD apparel, spoke in private with the responding Sergeant, while the Sergeant completely ignored the multiple people attempting to give testimony to the police.

After nearly fifteen minutes, the Sergeant returned from speaking with the woman, and told those there that he had let the pair go!

Infuriated, witnesses say that the Shomrim volunteers stood up to the Sergeant, creating a scene with the NYPD. Soon after, the woman and man “reappeared” without the NYPD apparel, and they were taken without cuffs to the 71st Precinct.

Multiple people who spoke with CrownHeights.info called the incident, “Shocking”, “Infuriating”, and “Frustrating”.

Crown Heights Shomrim declined to give CrownHeights.info a statement on the issue, and it remains to be seen what, if any, actions will be taken against the officers and perpetrators involved.