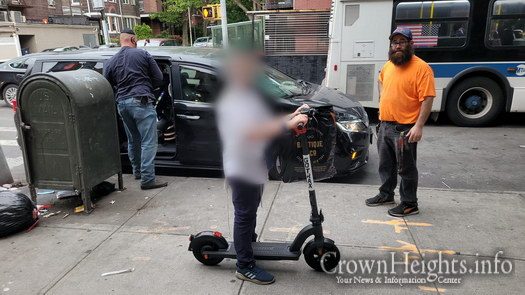 Electric scooters are all the rage, for those that ride them as well as the thieves.

A young boy riding an electric scooter stopped at the Boytique store on Kingston Ave Thursday afternoon and left his set of wheels outside. When he stepped back out a few minutes later though, it was gone.

Crown Heights Shomrim was called, and within a few minutes, the volunteers were reviewing footage of the theft. In moments, the volunteers had found the moment a young man had stopped by the font of the store, appearing to look at his phone for a  moment before snatching the scooter and riding off.

With the help of another store patron, the volunteers were able to identify the thief and track him back to his work.

The Shomrim volunteers recovered the scooter and returned it to its rightful owner.

CrownHeights.info would like to remind everyone to lease secure your bikes and scooters, as thefts tend to rise as the summer approaches.