« Yes, We Are on Telegram With All Your Chabad-Lubavitch News
Montreal Anash To Celebrate Yartzeits of Two Greats With Virtual Siyum » 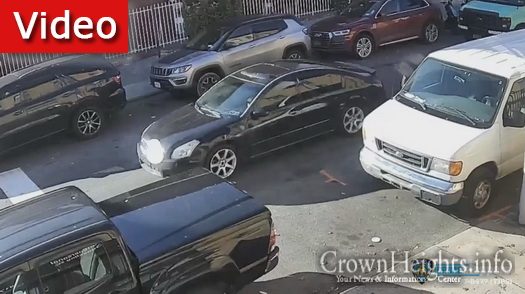 The New York City Police Department has released video of a vehicle that was reportedly involved in the shooting that took place on Kingston Ave and Eastern Parkway last Thursday.

As reported on CrownHeights.info, at approximately 10:23am, an unidentified individual driving a black sedan fired multiple rounds in the direction of a vehicle that was double parked in front of 781 Eastern Parkway. The man then fled in his vehicle, northbound on Kingston Avenue. There were no injuries reported as a result of this incident.

The NYPD is asking for the public’s assistance in identifying the vehicle depicted in the video, described as a black Nissan sedan.

Anyone with information in regard to this incident is asked to call the NYPD’s Crime Stoppers Hotline at 1-800-577-TIPS (8477) or for Spanish, 1-888-57-PISTA (74782). The public can also submit their tips by logging onto the CrimeStoppers website at WWW.NYPDCRIMESTOPPERS.COM or on Twitter @NYPDTips.

« Yes, We Are on Telegram With All Your Chabad-Lubavitch News
Montreal Anash To Celebrate Yartzeits of Two Greats With Virtual Siyum »