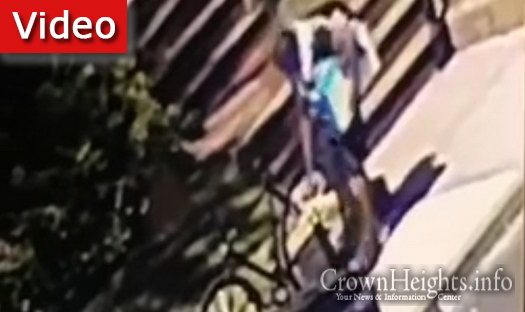 “Sorry, nothing we can do.” It’s said so much that it should become the new motto of the NYPD.

That was the answer that a Crown Heights resident received after she called the police to report multiple packages stolen from her porch on Carroll Street between New York Ave and Brooklyn Ave on Monday.

The theft itself was recorded on a neighbors home surveillance camera, and witnessed by the homes mail carrier, who was able to immediately report the incident to the owners. The mail carrier was even able to provide a close up picture of the thief, after seeing him “hanging out” in the vicinity of S. Johns Pl and Albany Ave.

Yet the police were able to “do nothing,” even after being told that there was video of the theft, they ignored their own promise to “follow up.”

The video of the theft paints an even darker picture, as the man struggles to ride away on his bike loaded with multiple packages, obviously from more than one location in the community.

UPDATE: The victim has again reached out to CrownHeights.info to inform that the police have contacted them, and are taking the matter seriously.