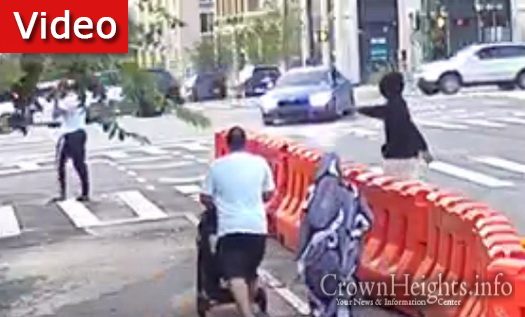 The video of a shooting that took place on Bedford Ave and Eastern Parkway Tuesday has surfaced, showing the brazen attack in broad daylight.

As previously reported on CrownHeights.info, the man was shot around 8:15pm outside  386 Eastern Parkway, on the corner of Bedford Ave.

The video shows as the victim, wearing a white shirt, was walking up Bedford Ave to the corner of Eastern Parkway, when a man in a black hoodie pulls out a gun, and shoots the man in the leg.

The victim then begins to hop down Eastern Parkway, using barriers to escape the attack. The suspect fled down Bedford Ave back towards Union Street.

This obviously targeted attack comes during a spike in gun violence in New York City.