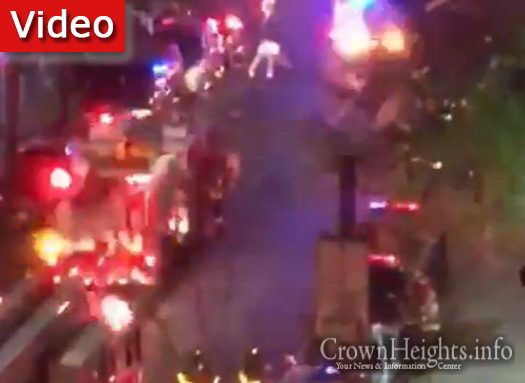 The officers of the NYPD aren’t even trying to pretend anymore, they have given over the city to the lawless.

During the last two straight weeks of fireworks, the NYPD has consistently blamed the politicians and knee jerk policies put in place due to the Black lives Matter protests as the reason for their inability to stop the nightly fireworks.

Last night, an astounded Crown Heights resident videoed the real truth as a police officers and fire firefighters stood by, blocking the street and watching as a group lit fireworks next to their vehicle.

The video was taken Motzei Shabbos around 11:00pm at night on the corner of Empire Blvd and Kingston Ave.

The officers and firetrucks were responding to calls for fireworks being lit on Kingston Ave between Lefferts and Empire, and pulled into the block the wrong way, blocking the street.

Two people can then be seen lighting a fireworks next to the fire trucks, completely disregarding the police officers on the corner, who did nothing.

Boro Park also saw an incident of the police turning a blind eye, after a resident called 911 five times on a group playing loud music and lighting fireworks.

The officers finally arrived, telling the caller that they had received a call for a group of JEWS lighting fireworks. The officers then told the Jews to go home before driving off.