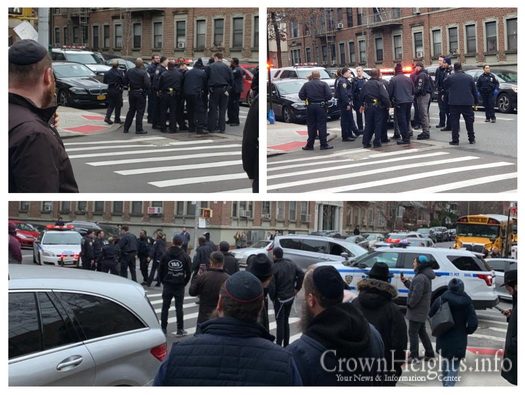 A man walking up Albany Ave triggered a large police and Shomrim response Tuesday afternoon, as he spewed hate at Jewish people walking on the Ave.

The incident took place around 2:00pm, as the man reached the area of Albany Ave and Crown Street with multiple Shomrim volunteers following.

Witnesses were shocked as the man continued his expletive laced tirade, and threatened to kill Jewish people nearby.

With just moments before the police arrived, the man was caught on video openly stating his hate for Jewish people, and espousing Black Israelite ideology.

The police swiftly intervened, taking the man into custody just across the street from Lubavitcher Yeshiva. He was taken to the hospital for an evaluation according to police sources.

The police also noted that there is presently no evidence at this time that the man belonged to the Black Israelite group.

Earlier today our Vol responded to multiple hotline calls for a male acting erratic & spewing hate. He was uncooperative with @NYPD71Pct officers who responded quickly and was taken to the hospital for evaluation #ItsWhatWeDo #BeAware pic.twitter.com/5JHU2Leryj