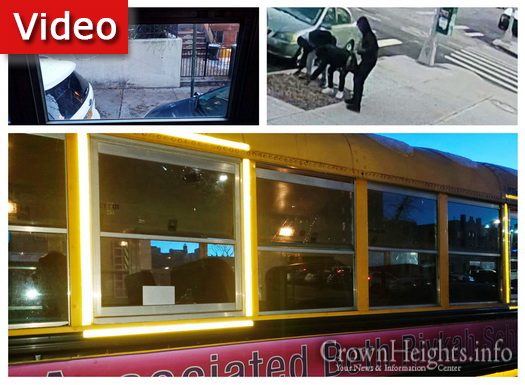 Every morning, the parents of Crown Heights place their children on their respective school buses feeling secure that their child will be well cared for on their way to school. Each evening, the parents wait outside to greet their eager youngsters as they dash off the bus, full of energy and happiness.

But this Tuesday, the children of one Beis Rivkah bus were traumatized after their bus was attacked by a gang of teenagers throwing stones.

The attack occurred on New York Ave by the corner of Lefferts Ave, just two blocks away from the 71st police precinct.

Three teenagers threw large stones at the bus, traumatizing the children and shattering a window.

The bus driver quickly drove off as the three perpetrators fled on East New York towards Nostrand Ave.

Shomrim was called, but despite a quick response, were unable to locate the teenagers.

The bus driver completed his route, dropped off all the children safetly, and went to the precinct to file a police report.