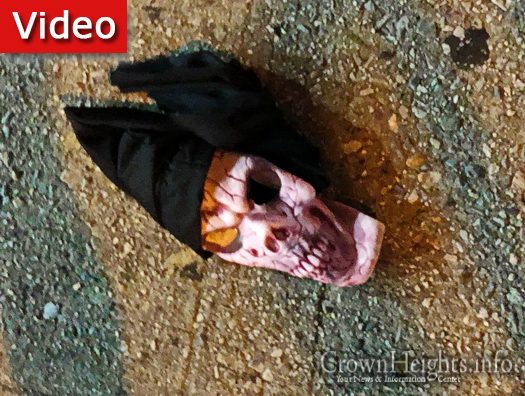 In a night reminiscent of a more violent time, the streets of Crown Heights were labelled dangerous as roving groups of young adults took to the streets looking to cause Halloween havoc.

An assault on Eastern Parkway and Buffalo Ave started the evening when a victim called Shomrim and 911 after he was lynched and robbed by a masked group. The Police and Shomrim responded quickly, identifying possible perpetrators nearby, but since they had been wearing masks, the police could not get proper identification.

Hatzalah was called for the victim, who required medical treatment for a head injury.

Around 7:30pm, calls began coming into the Shomrim Hotline reporting another rowdy group roaming around and throwing eggs at passerby on Empire Blvd near Lamont Ct. A young Jewish boy who was riding his bike down Empire Blvd became one of their targets. He approached a Shomrim volunteer nearby, informing him of the offending group. As the Shomrim volunteer pulled out his phone to dial 911, he too became a target.

Understanding that this group was out to cause mayhem, the Shomrim volunteer called for backup. Now with multiple volunteers, they tracked the group as it swelled and split with other groups joining then breaking off.

The group eventually migrated to the area of Albany Ave and Lefferts Ave, where they began throwing eggs and rocks at a Shomrim volunteer. 911 was called and the perpetrator arrested by the police a few blocks away. He was charged with Felony Assault.

As the police were making the arrest for the rock thrower, another more sinister incident was brewing. A Shomrim volunteer had spotted another group of young adults who were sneaking up on two unsuspecting Jewish girls. Fearing the worst, he quickly intercepted the girls, instructing them to quickly change direction and leave the area. The girls followed instructions, and fled the scene.

The group, noticing that the Shomrim volunteer had helped their prey escape, turned on the volunteer, first harassing then assaulting him. Chaos erupted as multiple volunteers responded to the call for help. The arriving volunteers found a group of violent young adults, bolstered by a growing number of residents from nearby buildings.

Despite being assaulted and harassed, the arriving Shomrim volunteers were able to follow the assailants, and assist the police in detaining them.

Once in custody, the Shomrim volunteers were able to positively identify two of the assailants. They were arrested and charged with misdemeanor assault. The police then dispersed the tense crowd, returning the area to its normal calm.

During the chaos, three Shomrim volunteers were injured, with one of then requiring treatment at a local hospital.

All three of the arrested assailants were identified as 16 years old, and due to recent changes to the law, were treated as minors and released to their parents.

Another assault also occurred last night outside of Meat, a restaurant on the corner of Bergen St and Kingston Ave in Crown Heights, where a man was beaten by a group of ten assailants. The victim was treated by Hatzalah for his injuries. There were no arrests made in connection with the incident.

As dangerous roving groups took to the streets to wreak some Halloween havoc our Vol put themselves in harm’s way, so that others dont get hurt. Job final: three UNDER arrest by @NYPD71pct #EyesAndEars #ItsWhatWeDo https://t.co/GMbE21e9qs