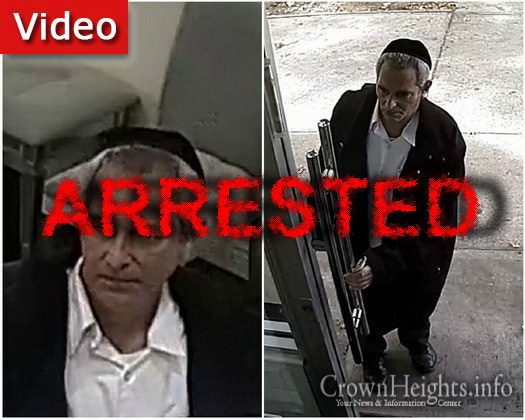 A man posing as a beggar who allegedly stole a necklace from a Crown Heights Jeweler has been arrested Tuesday, after being caught stealing in a Boro Park Shul. The 71st precinct had previously released a wanted poster asking for the public to help locate the thief.

A man wearing a yarmulka and white shirt has been arrested Tuesday after stealing from a Boro Park Shul. The man was wanted in connection with the theft of a gold necklace from a Crown Heights Jeweler.

As previously reported on CrownHeights.info, the alleged thief had entered Levi Laine Jewelers on Kingston Ave posing as a beggar. As the owner bent down to retrieve a dollar for Tzedaka, the man palmed the necklace, leaving the store before the owner realized the theft. The incident was caught on the stores surveillance system.

The alleged thief had earlier been spotted at the Boro Park shul, but was only detained briefly before being let go. The police returned some time later to place him under arrest.

On Friday 10/25/2019 an unknown male entered 415 Kingston Ave in the confines of the 71 Pct. The above depicted male removed a yellow gold diamond necklace valued at $4,000 USC. Anyone with information regarding the above subject please notify Det. ANCHUNDIA at 718-735-0501 pic.twitter.com/0km66FEBTO