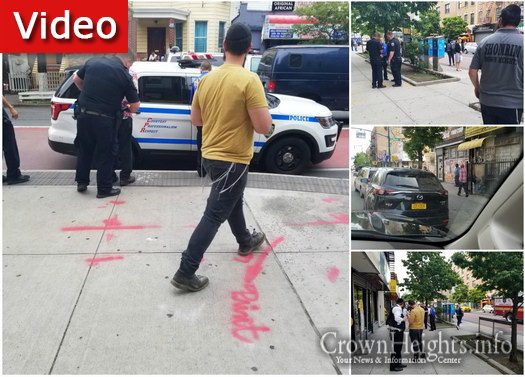 The Crown Heights Shomrim hotline rang Tuesday afternoon in regards to tablet that had been stolen from an unsecured truck on Parkside Ave between Nostrand Ave and Rogers Ave.

The driver of the delivery truck had been out of his vehicle making a delivery around 3:40pm, when the thief struck. The man can be seen on surveillance camera staking out the truck, before sticking his hand through an open window and making off with the tablet.

Noticing that the tablet was missing, the driver gained access to a surveillance camera in the area which caught the entire episode, and forwarded it to Shomrim.

Despite it being hours later, two Shomrim volunteers canvased the area and located the man less than a block away from the scene of the crime.

911 arrived, and after matching the video and description, they placed the man under arrest.

The tablet, which had been turned off, was not recovered.

Our Vol responded to a report of a tablet stolen out of a delivery truck on parkside Avenue. After a canvass our #EyesAndEars were able to locate the subject and notified @NYPD71Pct who made the arrest #Collaboration #ItsWhatWeDo pic.twitter.com/ai9wJRjQgW