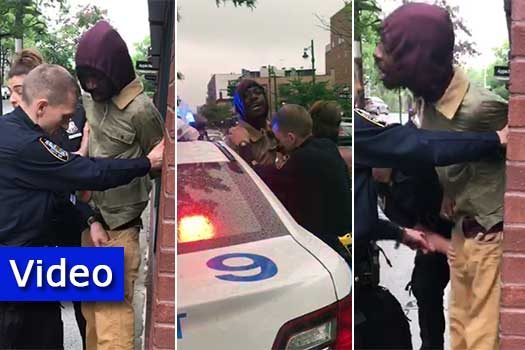 A man was arrested after going on an anti-Semitic tirade, threatening to “kill all the Jews”, spitting and throwing rocks at Jewish women and children on Carroll Street in Crown Heights.

Police have arrested a man who went on an anti-Semitic tirade and threatened to “kill all the [expletive] Jews” while spitting on and throwing rocks at Jewish people walking on Carroll Street in Crown Heights.

The incidents occurred at around 7:00pm in the vicinity of Carroll Street and Albany Avenue where the suspect, a Black man in his 20’s, was observed walking and yelling at every Jewish person he passed. His erratic behavior began escalating when he began spitting at passersby and even throwing rocks – one of which struck a young Jewish girl.

Police officers confronted the man outside Apple Bank on Albany Avenue. As officers attempted to take the man into custody he began resisting while shouting more expletives at the cops and at Jews that were standing nearby.

As officers struggled to put the man into their car, dozens of additional officers responded and helped get him under control.

Crown Heights Shomrim assisted the police department by locating some of the victims and bringing them over to the precinct in order to file a report.

Video has been edited to remove foul language