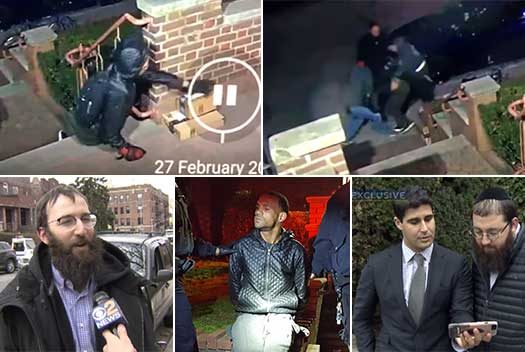 Following our story on Shomrim nabbing an alleged picky package thief, CBS News once again picked up on the story, expressing their fascination with the great work of Shomrim, and the brazenness of this alleged thief.

Video posted on CrownHeights.info shows how the suspect was taken into custody on Montgomery Street and Brooklyn Avenue.

It comes a little more than a week after a suspect was first caught on video looting packages left on porches just one block away.

Back on Feb. 18, surveillance video caught a suspect strolling up the steps of a victim’s home, picking up a package, tearing it open and throwing away anything he didn’t want.

“It’s infuriating,” victim Ben Lifshitz told CBS2’s Marc Liverman. “Guy walks up to the porch, hops up the stairs going two steps at a time, not a care in the world.”

A suspect was nabbed Feb. 27 after apparently attempting to do more of the same. This time, a Shomrim security volunteer spotted him, called other volunteers in, and they grabbed the suspect, holding him until police arrived.

Surveillance video of his arrest shows the suspect casually climbing up the steps of a home, sitting down on the top step, and tearing into a package. The suspect rifles through the package, pocketing some its contents, before picking up a second package, climbing down to the bottom of the stairs, sitting down and attempting to tear into it.

That’s when three men come running up and bring the suspect to the ground, holding him. They are joined by a two more men.

They held the suspect until the police arrived.

Hector Roman, 33, faces charges of with petit larceny and possession of stolen property.

Videos of the original theft:

Video of the thief getting caught in the act by Shomrim: