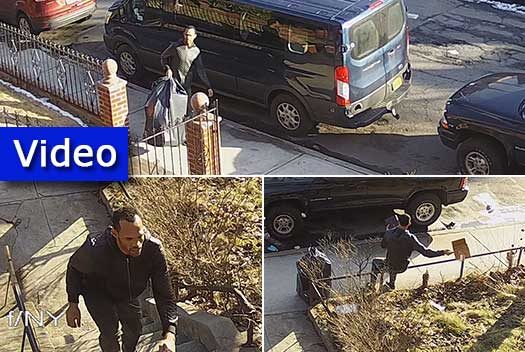 A brazen thief went on a package stealing spree earlier this week, collecting dozens of boxes from multiple homes in Crown Heights – each time opening those boxes and inspecting its contents right where he stole them.

Sunday afternoon a Montgomery Street resident arrived home and noticed a box and a padded package open in his front lawn. Upon closer inspection he noticed that the packages were addressed to him and was initially confused as to why they were opened and discarded in his front yard.

A review of surveillance video quickly revealed what occurred.

A man carrying a large garbage bag over his shoulder going from house to house and taking packages that were recently delivered and left on front porches.

“According to amazon my two packaged were delivered maybe 25 minutes before [the thief] stole them,” one of the victims told CrownHeights.info. “What is really infuriating is how brazen [he] was, carrying a bag that is clearly full of packages and boxes, then opening it right there in front of my house!”

High quality surveillance video clearly shows the man’s face and reveals that he spent nearly three minutes in front of one house inspecting the stolen goods.