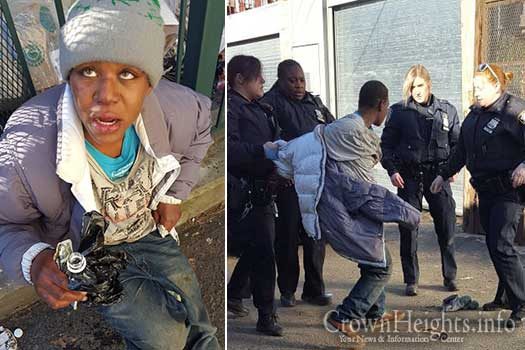 A would be thief was apprehended after grabbing a fistful of bills and coins from a bucket that was meant for charity. Shomrim located the woman and police arrested her.

A thief was apprehended after robbing Mrs. Devorah Benjamin as she was collecting charity on Kingston Avenue in front of Gombo’s Bakery.

The incident began when an alert and concerned passerby called Shomrim to report a woman that was badgering Mrs. Benjamin, and while on the phone she suddenly thrust her hand into the bucket containing the donated coins and bills, and grabbed a fistful and fled.

As she began fleeing down President Street many Shomrim volunteers began flooding the area, and quickly spotted the thief near Albany Avenue.

Police were immediately notified and together they managed to stop her inside a nearby alleyway, where she attempted to hide.

After speaking with the victim, she was arrested and charged with robbery and the stolen money was returned. As she was being placed into custody it became apparent that the woman was under the influence of drugs or alcohol and attempted to resist, but was quickly subdued.

Mrs. Benjamin is a common sight, sitting in her booth in front of Gombo’s Bakery or in her tent in front of Empire Kosher, raising charity for KSCVK which is an organization that pay for the wedding needs of brides and grooms that require it.

Tnx to a tip we received from an alert resident + great #collaboration between our Vol and @NYPD71Pct one arrested for stealing money from @KSCVKBrooklyn kingston avenue booth #ItsWhatWeDo pic.twitter.com/BDgEUVR35g