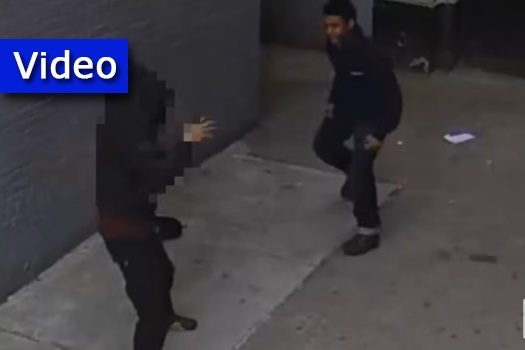 An African-American teenager posing as a customer ordered food from a Crown Heights restaurant. When the delivery man arrived at the address given, he handed over the food and asked for payment. Instead of receiving money, he was brutally beaten and robbed. Part of the attack was caught on surveillance video.

Police are looking for a young man who lured, attacked and robbed a deliveryman on St. Marks Avenue last week.

The suspect, posing as a customer, placed an order for food to be delivered to 1281 St. Marks Ave. between Rochester and Buffalo avenues at about 10:45 a.m. on March 13, police said.

As the victim, a 20-year-old deliveryman, got to the location, the suspect told him to bring the food to a different address, 1248 St. Marks Ave., located about a half block away.

When the man arrived, the deliveryman handed over the food and asked to be paid, police said. The suspect then punched the deliveryman multiple times, took about $50 from the victim’s pocket and fled west on St. Marks Avenue with the package of food.

Surveillance footage released by the NYPD on Tuesday shows a portion of the robbery and the suspect, dressed in a dark hoodie and jeans.