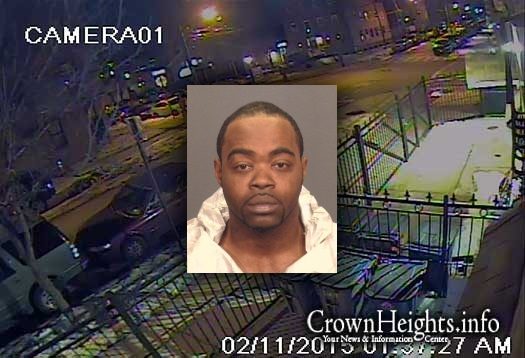 A brutal Crown Heights mugger who robbed and shot at one Jewish man, shot a teenaged girl three times at pointblank range when she said she didn’t have any money, and attempted to rob a third woman – all in the vicinity of Kingston Avenue and Maple Street in February of 2015 – was sentenced to 55 years to life in prison for the crimes.

Acting Brooklyn District Attorney Eric Gonzalez announced that a 34-year-old Crown Heights man was sentenced to 55 years to life in prison for firing his gun during the commission of two armed robberies in his neighborhood. He fired at one fleeing victim who had given him money and seriously wounded a second victim by shooting her when she did not have any cash.

Acting District Attorney Gonzalez said, “This defendant displayed a callous disregard for human life by robbing and shooting innocent victims. With today’s sentence a clearly dangerous and violent felon will spend many years behind bars where he won’t be able to hurt or terrorize innocent people.”

The Acting District Attorney identified the defendant as Jovan Frederick, 34, of Crown Heights, Brooklyn. He was sentenced today by Brooklyn Supreme Court Justice Raymond Guzman to 55 years to life in prison following his conviction on August 19, 2016 on first-degree robbery, second-degree attempted murder, first-degree assault, first-degree attempted robbery and three counts of second-degree criminal possession of a weapon following a jury trial. The defendant was deemed a persistent felony offender based on his numerous prior felony convictions.

The Acting District Attorney said that, according to trial testimony, on February 11, 2015, at 1:40 a.m., the defendant approached a 37-year-old man at the corner of Maple Street and Kingston Avenue in Crown Heights, brandished a gun and demanded money. The victim dropped about $200 to the ground and ran. The defendant then fired at the fleeing victim but missed.

The evidence further showed that on February 13, 2015, at about 1:15 a.m., a 19-year-old woman was retrieving the mail at her residence on Maple Street in Crown Heights when the defendant brandished his gun and demanded money. The victim repeatedly told him that she does not have any money on her and the defendant then shot her multiple times at close range, striking her in the abdomen. The victim spent approximately four months in the hospital, underwent multiple medical procedures and continues to live with a tracheotomy.

Police officers who responded to the defendant’s home on February 15, 2015 recovered a 9-mm semiautomatic firearm that contained the defendant’s DNA. The evidence showed that this was the same gun that was used in the two above-described incidents.

The case was prosecuted by Assistant District Attorneys Brian Wagner and Thomas Teplitsky, of the District Attorney’s Trial Bureau, Green Zone, under the supervision of David Klestzick, Bureau Chief.