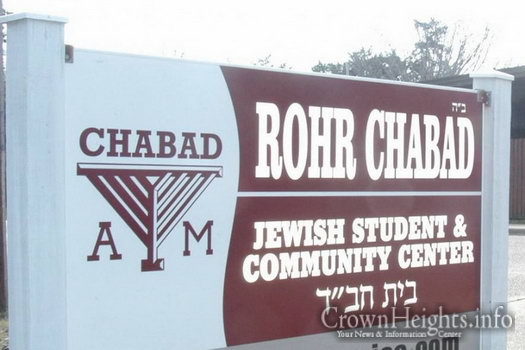 A sign identifying the Chabad Jewish student center at Texas A&M University was vandalized and then stolen.

From the Houston Chronicle:

At about 3 a.m. Sunday, Rabbi Yossi Lazaroff left Texas A&M University’s Chabad Jewish Center, driving an hour and a half to take his son to Houston’s Hobby Airport.

Minutes after he left College Station, video footage shows an unknown man kicking and hitting the student community center’s outdoor sign until it fell off its hinges, later removing the maroon-and-white sign from the premises, Lazaroff said.

Lazaroff returned at about 7:30 a.m. to see empty space between the two white signposts outside the building.

“This was damage, this was vandalism,” Lazaroff said Sunday.

Click here to continue reading at the Houston Chronicle.