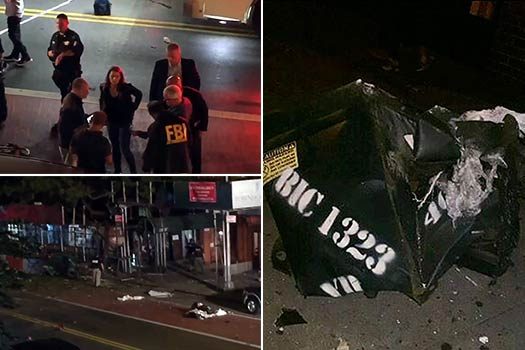 An explosion rocked a midtown Manhattan street on Saturday night — injuring at least 29 people, blowing out windows and sending scores of panicked pedestrians running for their lives.

The NYPD Counterterrorism Unit and the Fire Department were on scene investigating what caused the explosion in or near a Dumpster on W. 23rd St. between Sixth and Seventh Aves. at about 8:30 p.m.

A total of 24 people, including an 8-year-old, were wounded and taken to area hospitals — all but one suffering minor injuries. The seriously injured victim was rushed to Bellevue Hospital, sources said.

Police and FDNY units also responded to reports of a possible second explosive device found in a Dodge Caravan on 27th St., between 6th and 7th Aves., just before 11 p.m.

Quoting sources, Fox News said the second device – which was found four blocks away – was a “pressure cooker device”.

Mayor Bill de Blasio announced that the explosion was “intentional” though he stopped short of calling it terrorism. The FBI and New York Police Department would not rule out terrorism as a possible factor but said it was too early to determine the exact cause, law enforcement sources told Fox News. Police did not say whether they had any potential suspects.