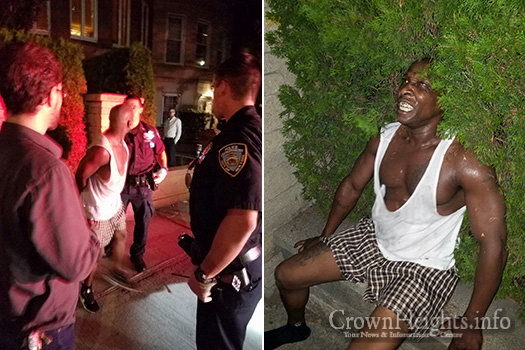 A notorious package thief has be caught again – this time red handed – by an alert Shomrim volunteer.

On Wednesday evening a Shomrim volunteer returning home observed a man in the hallway of his Eastern Parkway building carrying a bag with a number of boxes, along a few more in his hands.

Sure that the man had no business in the building he called for backup and confronted the suspect who dropped all the packages and fled.

He sprinted across the busy parkway and down Troy Avenue towards Union Street where perusing Shomrim volunteers lost him. Upon hearing the description they quickly figured out – and later confirmed by authorities – that the suspect was Derrick Pricher, 63, the notorious package thief that they assisted in apprehending earlier this year following a spate of package thefts in the neighborhood.

Knowing his history and where he frequents in the area, Shomrim set up and kept an eye on those locations and their patience was quickly rewarded. Pricher was spotted once again on Troy Avenue near President Street and Shomrim called 911.

Realizing he had been spotted Pricher fled down President towards Albany Avenue and right into the hands of waiting police officers and Shomrim volunteers.

He was taken into custody and arrested.

Pricher scored a free pass after being apprehended back in April and initially held on $50,000 bail when the district attorneys neglected to properly convene a grand jury. He was released on his own recognizance and free to continue his reign on package thefts in the area.

The district attorney blamed the release on uncooperative witnesses who refused to testify, despite the fact that it was Erev Pesach and many of the victims simply could not made the time to testify. Instead of rescheduling, the district attorney simply moved the case to the Felony Dismissal calendar where six months later the case gets completely dismissed. That date was due 10/28/2016, just two month away.

In Wednesday’s incident the packages that were found in Prichers possession belonged to a variety of different people.