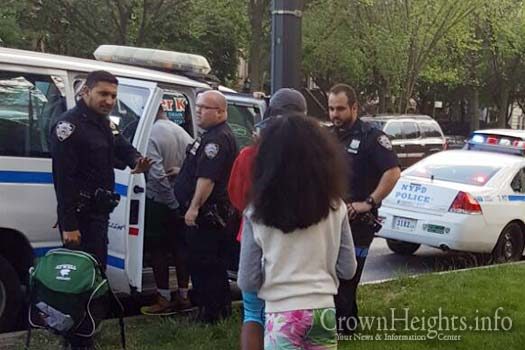 A black youth who attacked a Jewish student and stole his hat and Yarmulka admitted to targeting the boy due to his religion, and said the attack was part of a ‘bet’ between the assailant and his friends.

The 14-year-old boy who was arrested Monday night for stealing a 13-year-old yeshiva boy’s religious hat in the Crown Heights section of Brooklyn, wanted to win a bet he made with his friends, sources told JP Wednesday.

“It was very obvious they chose the boy because of the religion. Investigators spoke with several witnesses who described seeing the group of kids laughing when their friend stole the hat,” a police official said.

A person who witnessed the incident sprang into action and held down the suspect until police arrived, the boy’s father, Yosef Kanofsky, told JP in an interview.

“It was around 6:30 when I was told my son was assaulted. My first thought was like, ‘No… Not my son.’ But when I arrived at the scene I saw my son was O.K. I calmed down,” the father said.

“When I arrived the police was there already and took us back to the 71st station house where the commanding officer, Deputy Inspector Norman Grandstaff, interviewed my son and told us not to worry, they will take care of the suspect.

“A short time later the detectives from the Hate Crimes Task Force arrived and interviewed my son and described what happened to him. The detectives took it very seriously and handled the case very professionally and didn’t try to make it go away,” Yosef added.

Yosef said that he thinks local schools must teach children more to respect everyone and not to judge anyone based on their religion.

This incident follows a number of similar crimes aimed at the Jewish community, including the arson burning of a Jewish owned school bus, an assault on a Jewish student which has been labeled a hate crime, and a brick throwing at a school bus carrying Jewish students.

He was charged with grand larceny as a hate crime and criminal possession of stolen property religious items. He was later released to his parents with a ticket to appear in family court at a later date.