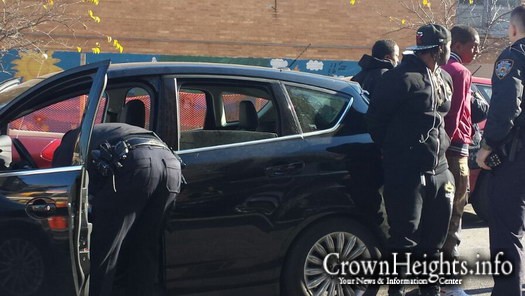 Cooperation between Williamsburg Shomrim and the NYPD led to the recovery of a vehicle in Bedford-Stuyvesant that was stolen in Crown Heights, along with the arrest of four people who were in the car.

The incident occurred Wednesday morning when Aron Biton, the owner of a rental car business, discovered that one of his cars was stolen in Crown Heights.

Equipped with GPS tracking he immediately discovered that the car, a 2014 Ford Cmax, was near Williamsburg and called Shomrim.

Volunteers with Williamsburg Shomrim arrived at the last logged location of the vehicle and observed four individuals enter the car. They immediately notified the police, and officers from the 79th Precinct responded immediately. Together they stopped the car and apprehended all four suspects.

“Thanks to Shomrim I was able to get both the car back and also have the thieves arrested,” Biton said, explaining that in the past the police simply respond to the location of the car and do not wait around to try and catch the thieves.

After dusting the car for fingerprints and checking the vehicle, police returned the car to its owner.