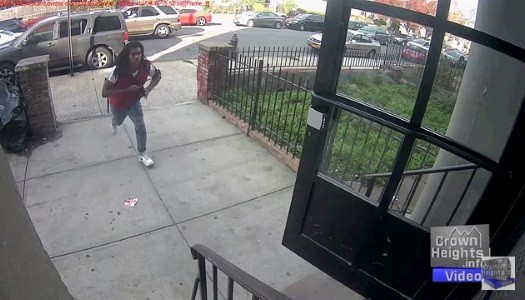 Last Thursday, October 29, at around 3:30pm, a school-bus driver who also serves as a Shomrim volunteer was driving up Troy Avenue between Carroll and President Streets when he witnessed a teenaged African-American male put his hands through the window of a parked car and remove a pair of Tefilin.

The volunteer could not leave the school-bus he was driving and confront the young man, so he instead radioed for backup from other Shomrim volunteers, all while keeping a close eye on the suspect.

The volunteer then observed the suspect enter the apartment building on the southeast corner of President and Troy. Mere seconds later, backup Shomrim volunteers arrived at the scene and entered the building after him, but the suspect had disappeared into one of the apartments.

One Shomrim volunteer, upon closer inspection of the vehicle the Tefilin were stolen from, deduced from the items in it that the owner was a teacher. Since the car was parked adjacent to the Beis Chaya Mushka girls’ school, they went inside and asked if the vehicle belonged to one of the teachers. Sure enough, the owner came forward. The volunteers then informed him of the theft and helped him file a police report at the 71st Precinct.

When the police arrived at the scene to investigate, a Jewish delivery truck driver approached them and said that someone had stolen two phones belonging to two of his workers from inside his truck while it was parked in the vicinity. Presuming that both thefts were perpetrated by the same man, since they both occurred around the same time and place, police included this incident in the criminal report as well.

The following afternoon, on Friday, a Shomrim volunteer obtained surveillance footage from the building’s management. The video was passed on to the NYPD detectives handling the case, who expressed amazement at the high quality of the footage, enabling them to easily identify the suspected thief.

Sources have told CrownHeights.info that they believe the arrest of the suspect is imminent.

A coordinator for the Crown heights Shomrim asked CrownHeights.info to inform all Shluchim and guests who will be coming to the neighborhood this weekend that it is inadvisable to leave personal belongings in one’s vehicle – even for a few minutes, and even if the item is one which the thief will have no use for (such as Tefilin, Talis etc.). “The thief doesn’t know that these things are useless to him until after he’s stolen them,” the coordinator explained, “and he is unlikely to return and put them back after discovering this fact.”